I. Synopsis of the story

The invasion should have been impossible. The surrounding Wasteland tribes are rather primitive when compared to the technological might of Nova City. Yet this once perfect utopia now lies in ruins as the young protagonists’ lives have become a battle of survival.

In their desperation to reverse the fate of their city, the closer they come to victory, the darker the reality seems to get. Our would-be heroes are about to discover that their biggest threat is not the invaders, but the truth which has remained hidden, until now.

This is CyberCell: Flux.

The world of Cybercell: Flux is not unlike our own. There are blue oceans and green plateaus, arid deserts and humid prairies; the climate is varied and generally suitable for the reproduction of life which brought forth human civilizations.

Yet, this world has developed a strange evolutionary pattern in which two very different types of civilization coexist. While in some areas, humanity is in the era of quantum physics and nanotechnology, there are other areas in which technology has remained stagnant in the early days of the industrial revolution.

The reason being, electricity can only exist within certain geographical boundaries. Outside of these areas lies the dead zone. Known as the Wastelands, these regions appear to be completely incapable of the smallest electrical spark. Moreover, electronic devices, such as cell phones or radios, taken into this dead zone will simply cease to function as the very electromagnetic field necessary is not present.

For the longest time, there was no clear division in this world, but when electricity was discovered, two distinct civilizations began to emerge. The more time that passes, the bigger the gap becomes between those in the electrically powered regions, and those in the dead zone.

While the dead zone has become known as the Wastelands, the areas of electric power are called the Pure Lands, being pure of whatever anomaly has deprived the Wastelands from electricity.

The naming of the divergent regions has been coined by those living with the luxury of electricity. Since its first discovery, these people have felt that electrical power was somehow a divine blessing from the heavens, and those without it must lie outside the favor of the gods.

Of course, modern inhabitants of the Pure Lands have outgrown such old-fashioned beliefs with the advancement of science and technology, but they still don’t hold favorable opinions of those outside their borders. They harbor an unmistakable sense of superiority towards the Wasteland denizens, regarding them as profane, with little difference from the animals once used to plough fields.

Thus, you have the Pure Lands, for the blessed and noble people, and the Wastelands for all the dregs of society. To be sure, those in the Wastelands themselves probably hold a contrary opinion, with technology being a sign of corruption on the planet, while their own lands still exist in harmony with nature.

There is no known element or pattern which causes any particular land area to be Pure, and it is certainly not evenly divided. Less than 2% of the land mass has been found to be Pure, and each Pure region varies in size. A single region can range from tens to hundreds of square kilometers in area, with each region separated, like technological islands in a vast ocean of wilderness.

So, while the Pure civilizations have seemingly unlimited potential for technological development, they are extremely restricted in the potential for border expansion. Those in the Wastelands however, have virtually unlimited lands but face significant technology constraints.

Although there’s a history of conflict between the regions, recent decades have been lived in mutual peace. After all, the technology of the Pure Lands becomes inoperative as soon as it enters the Wastelands; there’s no way around it. So a war to expand territory is meaningless. Likewise, the technology in the Wastelands has no hope of overcoming that in the pure lands, so it’s meaningless to try.

Instead, there is a loose cooperation, the Pure Lands can only acquire the Uranium it needs for power from mines scattered throughout the Wastelands. While the Wastelands cannot produce modern medicine or other advanced products on its own. Thus there are beneficial exchanges available which have led to large smuggling operations on both sides.

With such a great technological gap, there is a very real barrier between each Pure region and the Wastelands that surrounds it, usually in the form of great walls with defensive fortifications. Yet even these defenses are hardly thought as necessary for the miniscule threat posed by those living on the outside.

Perhaps this overconfidence is how the unexpected invasion of Nova City by the Wasteland tribe, known as the Renegades, could actually succeed. 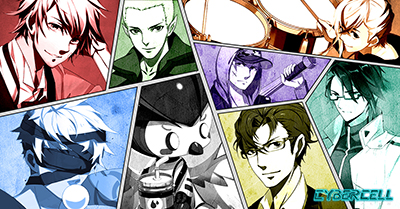 A real modern metropolis complete with bright neon lights and looming skyscrapers. Yet this prosperity is not without its drawbacks. An ever-expanding population inhibiting such a restricted area has led to segregation of the rich and the poor. Resources are scarce, and mainly in the hands of the aristocracy which limits the political power of ordinary civilians. Nobles therefore have greater rights and freedoms in such a society. Yet, in the dark underbelly of the city, where nobles dare not tread, the rebellious lower classes have their own vision of utopia, free from the constraints imposed by their rulers. While authorities usually have no reason to waste time dealing with these people, an unexpected invasion could give them the taste of liberation they’ve long desired.

The lack of area to expand has led to each Pure Land territory developing as an independent city-state, each with its own ruling family. The Rainier Family is the most powerful family in Nova City, and the hereditary rulers of the city are always Rainiers. While most city-states are technically loyal to Orion, the largest city, the distance and lack of effective means of long-distance communication means this loyalty is symbolic only. Each city-state has its own political system which has developed over generations according to the surrounding environment. Nova city has a dual power system, with one hereditary family controlling governmental administration and the military, while the other family controls energy and commerce. This allows both families sufficient power to limit each other and allows a mode of negotiation and cooperation. With Alicia’s mother at the head of the family, she is Nova’s reigning monarch, with Alicia herself being first in line to be the next ruler. Her chief rivalry comes from the Sylvain family, with Jules having recently become the head after the death of his father. The two families have long been at odds with each other, and recent events have only aggravated the situation further.

Not unique to Nova, The Syndicate has lodges within all the major cities of the Pure Lands and commands a significant level of technology independent of the ruling aristocracies of each city. They claim to be the crook which balances power and order. They are emissaries of secrets, and are well-respected in their capacity for discreetly passing vital information between individuals who cannot, or dare not, meet in public.The Syndicate headquarters is said to be the Anima, the location of which has never been made known. Only the heads of each branch know the secret of maintaining contact with the Anima, from which they receive their orders. The group is famed for their intelligence work and has a small but well-equipped security force protecting each of their establishments. The total extent of their influence on political and business affairs remains unknown.

While most people in the Pure Lands think of them as all the same, many different Wasteland tribes exist all with different traits. There are plenty of peaceful tribes which exist in cooperation with each Pure Land city, bringing in valuable trade resources, though usually in the form of smuggling. Only a small proportion of the tribal groupings are as chaotic and warlike as those of the Pure Lands like to believe. Yet, militant Wasteland tribes have become more active in recent years, with increased assaults on trade caravans and expeditions. Their numbers are increasing.

The largest city in the world is just as technologically advanced as Nova, but has less commercialization and a larger military presence. Thought of as Authoritarian, it is technically the leader of all Pure cities, although the vast Wastelands separating it from any contact with other cities makes its leadership position merely symbolical.